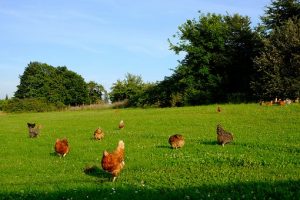 Discreet and Delicious Performance Chefs buy fresh, organic food whenever possible for our elite athlete clients, but what is the difference between organic and conventional farming and is it worth everyone buying organic food?

Definitions of organic vary from country to country, but in the UK, the Department for Agriculture and Rural Affairs (DEFRA) states that:

“Organic food is the product of a farming system which avoids the use of man-made fertilisers, pesticides; growth regulators and livestock feed additives. Irradiation and the use of genetically modified organisms (GMOs) or products produced from or by GMOs are generally prohibited by organic legislation.”

Organic farming is really just traditional farming… farming done the way it was for thousands of years, before the industrial revolution led to the development of synthetic fertilisers and pesticides. The early incarnations of these chemicals were not developed particularly safely, and some had serious side effects. What we now know as organic farming began in the early 20th Century as a reaction to the increasing reliance on these chemicals.

It’s pretty clear that organic farming is better for the environment in comparison with conventional farming. Any chemicals used on crops eventually find their way into waterways, causing problems for wildlife, and ultimately into our tap water. Less energy is used in organic farming: there is no need to keep sending tractors round all of the fields dispensing chemical treatments and the energy needed to produce and transport the fertilisers and pesticides is also not needed for organic farming.

Some research suggests that organic foods may have higher nutritional value than conventional food. The reason for this is that in the absence of pesticides and fertilisers, plants boost their production of the phytochemicals (which are actually the vitamins and antioxidants which we value and need in our food) that strengthen their resistance to bugs and weeds.

Organic farming can also offer benefits for animal welfare, as animals are required to be kept in more natural, free conditions.

The biggest downside of organic farming is that the yield (produce per acre) is lower, typically around 20% lower compared with conventional farming. This has two main implications: cost and land use. The farmer has to make more money from less produce so organic is more expensive than non-organic. In some areas of the world, where there is limited usable land but a rapidly growing population, maximising yield is the most important factor, so organic farming is not the best option here.

Overall, the jury is still out on whether or not it is worth paying more for organic produce. Some experts argue that eating plenty of fresh fruit and vegetables is already so good for you that the small extra amounts of vitamins and minerals in organic fruit and vegetables is insignificant. The same argument is used about the trace chemicals in conventionally farmed food… we consume so many chemicals in food now (colourings, flavourings, sweeteners) that how much difference does a few more make. However, when you look at organic farming as a whole and its reduced impact on the planet, perhaps that is reason enough to consider it.