Performance Chefs – The need for Discreet and Delicious

A Brief History of Sports Nutrition

Back in the day, before football became all professional and commercial, some players used to go out the night before a match, have a few pints and a kebab then turn up at half past two the next day ready(ish) to play. That was normal. Few people understood the connection between diet and performance then.

The field of Sports Nutrition began to emerge in the 1980s, breaking free from exercise physiology laboratories and finding practical application in endurance sports such as distance running and cycling, where carbohydrate intake was the key factor. It took at least 10 more years to find its place in other, more power-based sports, where protein intake and the balance between the macro-nutrients was as important as the carbohydrate intake. Sports Nutrition, as we know it today, was born.

In 1996, when Arsene Wenger started work as manager of Arsenal, he implemented an overhaul of dietary practices at the club, replacing sugary foods and lots of fatty meat with fish, lean meat, fruit, vegetables and vitamin supplements, and discouraging alcohol consumption. They won the league and cup double in 97/98 and finished in either first or second place in the league in eight of Wenger’s first nine seasons at the club.

Word of Wenger’s methods spread throughout football and other clubs soon followed suit, and now an advanced understanding of sports nutrition plays an important role at every league club, with specialist Sport Science departments becoming the norm.

We all know how vital sports nutrition is to fuel the body and also to repair the damage of punishing daily workouts. We also know how well the players are fed and watered when they are at the club, with nutritious breakfast, snacks, lunch and drinks all provided during training and match days.

Sports Nutritionists work closely with strength and conditioning staff and the club’s Performance Chefs to ensure that the food the players eat during the day is top notch. However, when they get home after training and need an evening meal, they may have some guidance from the club, but many will not know how to implement it and make a tasty, nutritious meal.

Many of the big clubs in the Premier League now have on-site laboratory facilities and are able to analyse every detail of a player’s performance, body composition and blood. It is now common for the Sport Scientists to test the players in the morning and then the Sports Nutritionists, part of the Sport Science team at every club, gives them instructions for what to eat at lunchtime in order to address any specific mineral deficiencies.

For example, if a player has a lower than usual blood iron reading, then they will be told to eat red meat and spinach for lunch. If their potassium is reading low they will be given a banana smoothie and told to have potatoes. So, it makes no sense then, to leave them to their own devices in the evening.

Elite footballers are young men who may be away from the comforts of home for the first time and many of them can only do very basic cooking, and yet their periodised nutrition programmes require them to eat precise amounts of the macro-nutrients in their main meal every evening. X grams of protein, y grams of carbohydrate and z grams of fat. The sports nutritionists at their clubs provide very specific guidance.

The optimum ratio of carbohydrate to protein to fats changes daily, depending on factors such as match day schedule, injury status, travel arrangements, training schedule and even individual training activities. The ratios are not even necessarily the same for any two players on any given day.

In addition to the macros, it is important for players to maintain healthy levels of vitamins and minerals in their diets to help with recovery, sleep and general good health… no one performs well after just 3 hours sleep or when dealing with a cold. Sports Nutritionists also take these aspects into account when providing their advice. 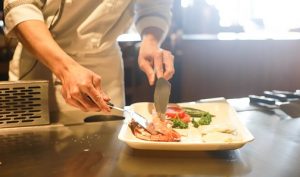 Discreet and Delicious, the performance chef in action

The Importance of a Performance Chef

In the modern, professional, highly-lucrative game, most footballers take their job very seriously, they understand that they need to be professional in every aspect of their career, from media interaction to lifestyle choices. The smart players are beginning to understand that looking after their body and mind off the pitch allows them to perform at their best on the pitch. In turn this leads to career longevity and increased earning potential… the best players are also the best paid players.

More and more elite professional football players are turning to Performance Chefs to combat the exhaustion of a long season and to ensure their performance and recovery times are the best they can be, by eating the right combination of vitamins and nutrients and at the right times. Rather than it just being another nice luxury that their high salaries can provide, they are beginning to see it as an investment in their careers and are choosing chefs who understand and focus on Performance Nutrition rather than simply cooking nice food. Most chefs can make nice food, but not many think about tailoring that food to meet the precise requirements these players need.

The very best players in the world like Harry Kane, Lionel Messi, Cristiano Ronaldo and Gareth Bale have Performance Chefs. Either Messi or Ronaldo have won the last 10 Ballon D’Or and both credit some of their success to having a Performance Chef cooking all their meals at home.

Gareth Bale was quoted in a Daily Telegraph interview as saying:
‘It was brilliant when we got our personal chef; it’s like going out for a meal every night. He makes sure I eat all the right stuff – the vegetables, the fruits, the right types of meat, and prepares it in the right way.’

On 1st January 2017 Harry Kane employed a Performance Chef to cook for him and his family and that same year he broke Alan Shearer’s record for Premier League goals scored in a calendar year. He attributes much of his new-found success to the chef:

“I think, over the last year or so now, I’ve changed a lot off the pitch with the nutrition side of it. It kind of clicked in my head that a football career is so short. It goes so quickly, you have to make every day count. So, I have a chef at home to eat the right food, helping recovery. You can’t train as hard as you’d like when you have so many games, so you have to make the little gains elsewhere, like with food.”

Young players look at the modern greats and look up to them, copying not only their tricks and skills but also their professionalism and approach to the game. They think: “If the best players in the world have their own Performance Chefs then maybe I should have a Performance Chef to help me be like them and play like them. I want to be as good as they are, I want to be the best.

This is where Discreet and Delicious come in. Our Performance Chefs already have a good understanding of performance nutrition, but we also like to work with the player’s personal or club Nutritionists to ensure that we are providing exactly the food that they need and none of the food they shouldn’t have.

A lot of the food recommended by nutritionists, whilst undoubtedly good for the player, can be rather dull and uninspiring. What we do is add the cheffy know-how to make those foods interesting and tasty without diluting the nutritional value.